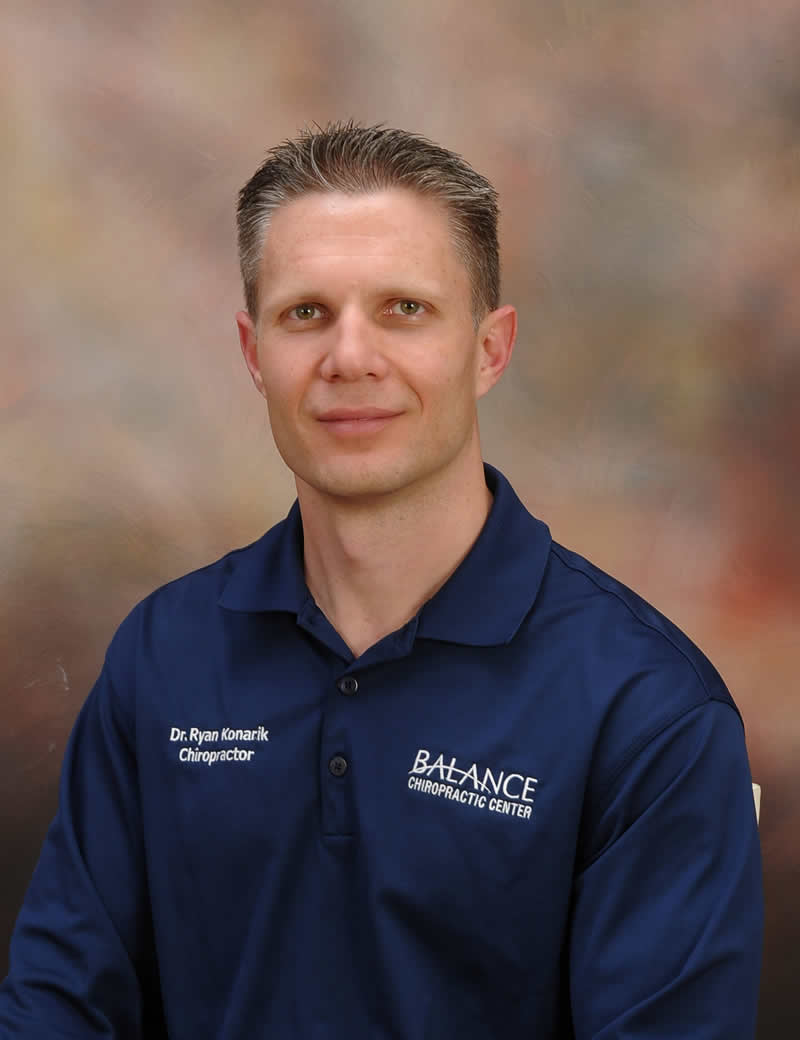 The dream of a 16-year-old boy comes true, this is what prompted Ryan M. Konarik to become a Houston chiropractor.

Let me introduce you to Ryan M. Konarik, a chiropractor with a new office, in the North East Houston Metro area. Many of his patients just call him Dr. K for short. He worked in Liberty for a few years, but he was born and raised in South Texas. He is a small town boy from Ganado, Texas, boasting a population of two thousand.

But first of all, let me tell you why Dr. K chose chiropractic for his profession. While playing football at the age of 16, he felt something grab in his lower-neck area, the muscles tightened with unbearable pain and caused him to become light headed and collapse. When he tried to move his head, he could only turn in one direction. The typical drug treatments did nothing to help with his condition. The muscle spasms eventually relaxed and the inflammation and swelling subsided. The area of his neck now felt like a small red-hot poker was jabbed in between his neck joints. Dr. K was facing the possibility that he may have to quit playing football. To play offensive lineman you have to keep your head on a swivel and he only had half of his normal range of motion. After a week of school vacation, he knew something had to be done.

His father told him that he needed to see the chiropractor in the neighboring town of Edna. He made his appointment and went over. The only problem was that young Dr. K had never heard of chiropractic before and had no idea what they did. Frankly at this point he didn’t even really care. He just wanted the red-hot pokers out of his neck and to be able to turn his head to both sides.

The chiropractor first of all wanted to know about Dr. K’s problem to determine whether or not he was a chiropractic case. After determining this, the chiropractor did a thorough spinal examination and took x-rays as indicated by Dr. K’s problem. After being adjusted, his pain started to fade away. It was like someone finally poured some water on those red-hot pokers and put them out. Just as amazing was that he had all his neck range of motion back. He never thought he would be thankful for being able turn his head. But what was most important was that his neck was stronger due to the rehabilitation and restructuring of the spine. It took time, but the time taken was well worth it to maintain his physical health.

At that point in Dr. K’s life , he decided to dedicate himself to chiropractic and the principle of relieving pinched nerves (subluxations) and getting sick people well. He started his chiropractic education on his own while still in junior college in Victoria. He would travel a hundred miles each way to visit a master chiropractor in Sugar Land. Dr. Ronnie Chambers took Dr. K under his wing and taught him the diagnostic techniques that had taken him nearly forty years to develop. After Dr. K finished his pre-chiropractic education at Victoria College, he went on to professional college. He enrolled at Texas Chiropractic College in Pasadena, Texas. At TCC he studied the “basic” sciences such as anatomy, neurology, pathology, chemistry, and several courses in diagnosis, x-ray and specific preparation in scientific study, as well as chiropractic philosophy to reach his full potential as a Doctor of Chiropractic. Besides his Doctorate Degree in Chiropractic, he was able to earn his Bachelors Degree in Human Biology, while graduating with honors.

Active in his profession, he works hard to help mentor young chiropractic students as they work toward graduation. Most of all he enjoys lecturing and giving health care presentations to the community about what chiropractic is and what it is not. This has helped him realize that his primary goal is to be of service to humanity and promote the education of the public to the importance of health through chiropractic.

Sometimes pain seems like a minor thing, but when it causes alteration and total disability, it is a danger signal that means something is wrong and the body is not working correctly.

Finally realized is the dream of that 16 year old boy, who after being helped through chiropractic, wanted to grow up to be of service to people who are in need of the healing art of chiropractic. This is why Dr. K is dedicated to helping you find the cause of your health problems, so you too may realize your full potential.[/ezcol_1half_end] 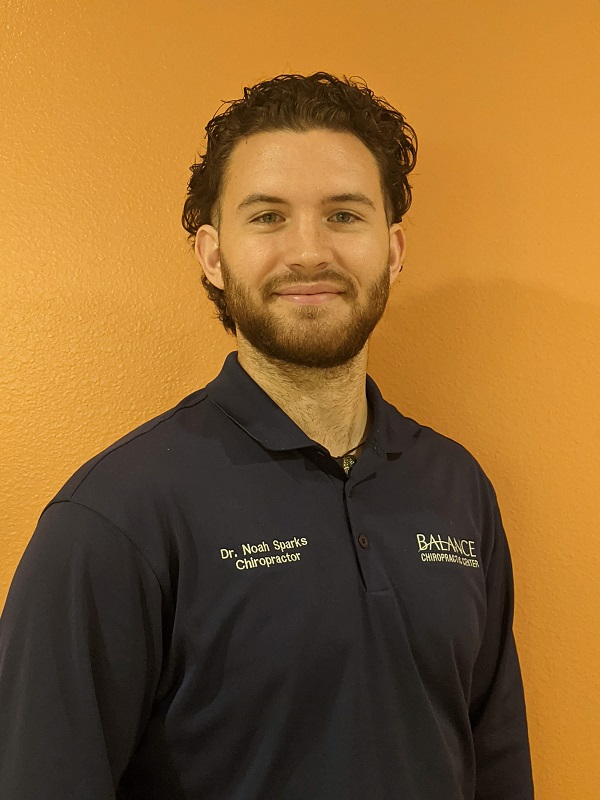 Dr. Sparks always knew he wanted a job that involved using science to fix things, but never liked the idea of only being able to fix something AFTER it had already been broken. It was this predicament that attracted Dr. Sparks to the field of chiropractic, where he has the opportunity to both treat the sick AND maintain the health of those who are well through preventative care.

Dr. Sparks is an up and coming chiropractor using his freshly educated mind to help patients at Balance Chiropractic Center in North East Houston. Many of his patients knew him as “Noah” while he was interning there before he graduated and became “Dr. Sparks.” In addition to interning, he also worked as a massage therapist while in Chiropractic school to develop his specialty in soft tissue manipulation. Dr. Sparks was born and raised in a small town right outside of Houston called Huffman, Texas, which is just a town over from Crosby!

Now, let’s take a closer look into why Dr. Sparks chose chiropractic for his profession. First off, Dr. Sparks struggled with a childhood condition called nocturia. This caused him to either wake up frequently at night to pee or wake up to a pool in the morning. It was a very embarrassing condition for him to deal with which drove him to receive medication when he was about 7 years old. The medication worked for the most part as long as he took it EVERY night. He did this for years until his parents met Dr. K at a Christmas fundraiser run where they were introduced to the wonder that is chiropractic. From there, his parents had him treated by Dr. K who, after a thorough examination, determined that the cause of his condition was treatable with chiropractic. Dr. K used adjustments to correct subluxations within Dr. Sparks’ spine and his condition COMPLETELY resolved in a matter of weeks. He never had to take the nocturia medication again! This played a large role in Dr. Sparks’ decision to choose chiropractic over any other healthcare profession, along with its capacity to provide complete corrective care and not just symptom management.

Dr. Sparks began his college studies at Lone Star Community College where he completed all of his pre-chiropractic education. He then enrolled at Texas Chiropractic College in Pasadena, Texas where he attained a Bachelor’s Degree in Human Biology and, after a full 7 years of college education, a Doctorate Degree in Chiropractic graduating with honors.

Outside the clinic, Dr. Sparks enjoys working on various art pieces with his beautiful wife, being involved in his church, camping, bicycling in the neighborhood, gaming and spending time with his family. He also spends time away from the office advertising at community events to help bring the gift of chiropractic to as many people as possible.

Dr. Sparks has committed his career in chiropractic to using the knowledge he attained from school, combined with his God-given gift of healing, to get as many people as possible out of pain. And furthermore, educate them on how chiropractic can be a natural avenue to elevated physical, emotional, and spiritual health!